Dogs and Horses Mimic Each Other's Expressions During Play

By analyzing videos of dogs and horses playing together, researchers are finding clues about what they call "a universal language of play."
Image 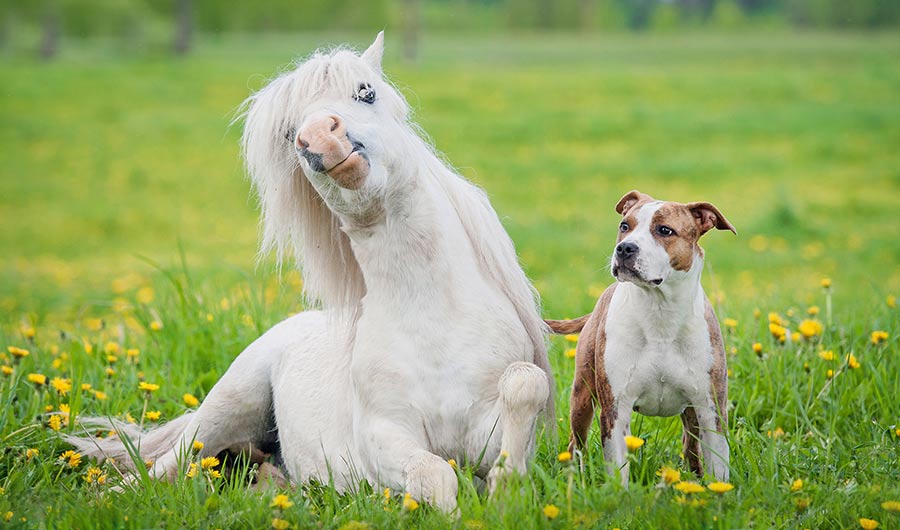 (Inside Science) -- Many animals play. While play may not appear to serve any immediate function, it likely evolved because it can help animals rehearse key behaviors, relieve stress or build relationships, according to Elisabetta Palagi, a sociobiologist at the University of Pisa in Italy. Research on play between species may shed light on how capable each species is of detecting and interpreting playful actions. But up to now, most such work has focused on play between humans and their pets.

In a new study, Palagi and her colleagues focused on play between dogs and horses, both intelligent, domesticated social animals that can recognize the facial expressions of humans and members of their own species. After examining hundreds of dog-and-pony shows from YouTube, they focused on 20 videos recording 20 different pairs of dogs and horses freely playing without any human interference.

The scientists found the dogs and horses both often displayed relaxed, open mouths toward each other, a common playful facial expression in mammals. Both also often placed themselves in vulnerable positions through actions such as rolling -- likely to signal friendly intent.

In addition, the scientists unexpectedly found the dogs and horses often rapidly imitated each other's facial expressions, the first time such mimicry was seen between species. In prior work, the researchers found dogs quickly imitated the faces of canine friends more than those of strangers. In the new study, they discovered such facial mimicry happened between dogs and horses roughly as often as it did between pairs of friendly dogs.

The findings suggest that despite the size differences and evolutionary distance between them, dogs and horses can play in ways that reduce the chances of misunderstandings escalating into aggression, according to the researchers. "Play is a widespread activity in mammals and birds, and it represents a field in which it is possible to develop a common way to communicate," Palagi said.

The scientists detailed their findings in the May issue of the journal Behavioral Processes.