Study of fish personalities highlights the importance of wildlife as individuals, not just species.
Image 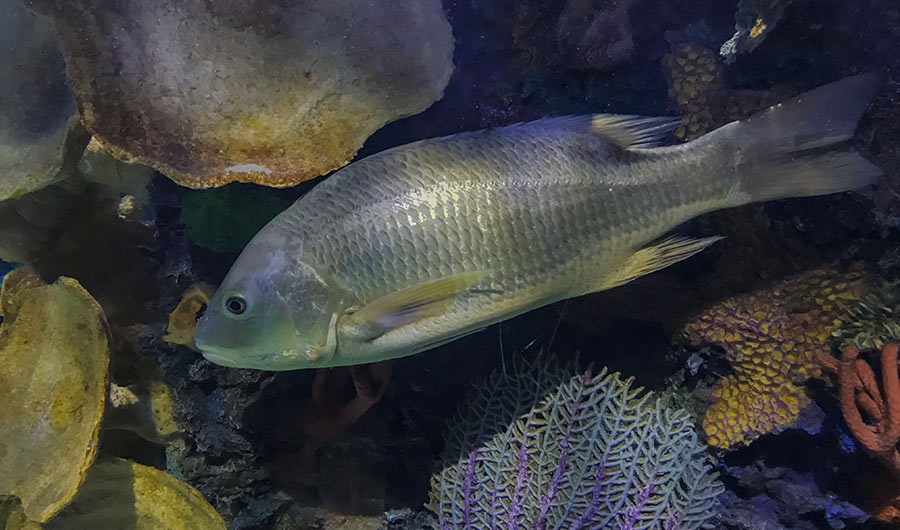 (Inside Science) -- People have unique personalities, and that's part of what makes them special and important.

Apparently, the same is true of fish.

Fish with certain behavior patterns are especially valuable to the ecosystem, delivering a wealth of nutrients to plants and algae, according to new research. By using fishing methods that kill the boldest fish, humans could potentially throw the environment out of whack -- even if it looks like there are plenty of fish left.

"Certain individuals can truly have disproportionate ecosystem-scale effects," said Jacob Allgeier, an ecologist at the University of Michigan in Ann Arbor who worked on the research.

Many traditional conservation efforts have focused on preventing the extinction of particular species. More recently, there has been a shift toward protecting the way whole ecosystems operate, said Allgeier. That means maintaining the roles creatures play in their environments, rather than just making sure some members of the species survive.

"That's why the water's so clear in a coral reef," said Allgeier.

Pollutants such as human sewage and fertilizers can add nutrients to the water, but those nutrients are then often too great in quantity and in the wrong proportions, leading to harmful overgrowths of algae. In contrast, fish provide the perfect balance of nutrients through their waste, releasing phosphorus through their anus and nitrogen through their gills -- the fish equivalent of urinating. Their movements spread those nutrients around the environment, said Allgeier. Past research has shown that coral grows faster in parts of a reef where fish spend more time.

From the bold flow the spoils

The new study focused on two species of fish, gray snapper and cubera snapper, living in a mangrove estuary in the Bahamas. At low tide, the estuary transforms from a crystalline lagoon into a morass of mud, and the fish retreat into depressions a few meters across that still retain water. At high tide, they emerge and forage around the estuary, releasing nutrients as they go.

The study site at low tide (left) and high tide (right). The estuary is located on Abaco Island in the Bahamas.

Rights: This image may only be reproduced with this Inside Science article.

But not all fish contribute equally. Bold, energetic fish move around more, which increases their metabolism and causes them to produce more nitrogen, said Allgeier. In addition, fish that travel more will transport more nutrients from place to place.

To find out whether the variation between individuals really mattered for the ecosystem, Allgeier and his colleagues placed tracking devices in fishes' bodies and installed receivers in the deeper pools the fish used for shelter. When a receiver could detect a fish, that indicated it was resting in the pool. When none of the receivers could detect it, that meant it was probably out foraging.

Even before he analyzed the data, Allgeier could see that fish had their own personalities.

"Certain individuals would only visit, you know, four places, and they would do it time in and time out. And another individual would visit three only, or one only," said Allgeier. "That made me realize, 'Wow, these are really distinct behavior patterns.'" 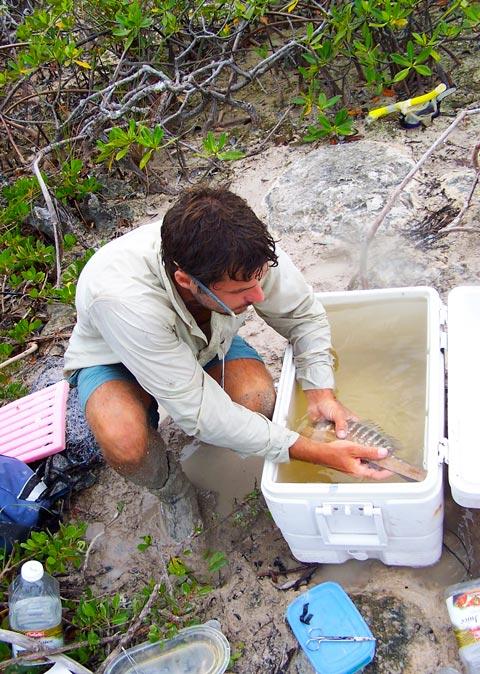 Jacob Allgeier measures a gray snapper. According to Allgeier's research, the fishes' personalities are more important than their size in determining how much nitrogen they provide to the ecosystem.

When the researchers estimated how much nitrogen each fish was producing, they found that much of the job of providing nutrients was being done by just a few individuals -- outliers that were exceptionally energetic. Remarkably, the two snapper species appeared to provide about 97% of the nitrogen in the ecosystem. That was nearly double the estimate derived from traditional methods that didn't account for the fishes' diverse behaviors. The findings suggest past research may have underestimated the importance of fish in ecosystems, said Allgeier.

Typical approaches to fisheries management allow fishermen to catch somewhere between 30% and 70% of the natural, unfished population, with the exact number depending on how many fish are needed to maintain a stable population. Gray snapper and cubera snapper aren't heavily fished in the estuary where Allgeier worked, but elsewhere in the Caribbean they are important resources for commercial and subsistence fishing. One of the most common ways of catching them is with a rod and line. The fish most likely to seize the hook are the bold, active ones -- the same individuals that do the most to nourish the ecosystem, said Allgeier.

The new study didn't measure how fishing affects nutrients in the real world, but they used a mathematical model to simulate what might happen if fishermen killed the most active 50% of fish. The model suggested this would reduce the nitrogen supply from the fish populations by about 65% to 70%.

Tropical coastlines are home to many of the world's most diverse and beloved ecosystems, and they are already suffering from climate change, overfishing and pollution. In theory, the loss of nutrients from fish could be an added stressor that pushes some habitats over the edge, said Allgeier. The findings were published last week in the journal Science Advances.

The meaning of diversity

Simone Des Roches, an evolutionary ecologist at the University of Washington in Seattle, praised the research for connecting the behavior of individual fish to larger ecosystem processes, and for doing so in a natural environment. "That's what's really powerful about this particular study," she said. She added that if the differences in behavior are passed from parent to offspring, then fishing could remove the genes for boldness from the population, causing an evolutionary change that would be difficult to reverse.

The implications of the study are larger than fish and nitrogen, striking at the heart of the conservation ethic.

"I do promote the conservation of biodiversity. I just think we need to consider what we mean when we talk about biodiversity," said Allgeier. "This is a clear example of the species-level concept sort of failing us on some level."

Humans could be selectively destroying animals with certain personalities or abilities through hunting and fishing, and in other ways that are less obvious. For example, in California, climate change is killing off the sticklebacks with body traits that likely make them better at swimming in fast-moving water, leaving only the ones that are better at maneuvering in slow, murky water, according to recent work by Des Roches.

The new study suggests that in principle, it's possible for the loss of certain traits within a species to have major environmental consequences, said Allgeier. No one will know about those consequences unless they look for them -- and that may mean appreciating wildlife not just as species, but as individuals.